The Evolved Laser Interferometer Space Antenna (eLISA), previously called the Laser Interferometer Space Antenna (LISA), is a proposed European Space Agency (ESA) mission designed to detect and accurately measure gravitational waves – tiny ripples in the fabric of space-time. The tentative launch date for eLISA, according to ESA Cosmic Vision Program, is in 2034. A forerunner mission, LISA Pathfinder (LPF), was launched by ESA on December 3rd, 2015 to test several new technologies planned for eLISA. Precise LPF mechanics, propulsion, optics and electronics are all designed to demonstrate the geodesic freefall of the inertial sensor reference body needed for measurement of gravitational waves.
This presentation starts with an introduction to the LPF spacecraft and its sub-systems, indicating their roles, design challenges and required performance. The rest of the presentation is then focused on technology verification of the Inertial Sensor Front End Electronics (IS FEE), which was designed in Switzerland under supervision of ETH Zürich. Being one of critical technologies on the spacecraft, its functionality and performance is presented in each step of LPF commissioning conducted in January and February 2016. The most critical operation was a release of two inertial sensor reference bodies (small gold – platinum cubes), which initiated the sensor drag-freefall check. Additional tests were conducted in the closed loop control from sensor via IS FEE and laser optical metrology to spacecraft propulsion, before a green light was given to start a science operations phase in March 1st, 2016.
The science operations phase is planned for a duration of four months. The aim is to quantify and characterize all stray forces on inertial sensor reference bodies and compare these measurements with the theoretical calculations. The LPF and spacecraft design shall ensure that these stray forces remain negligible so that one of the sensor reference bodies remains in pure geodesic freefall. This means that the reference body has an unprecedented level of its residual acceleration needed to detect gravitational waves. The presentations ends with key achievements and conclusions. 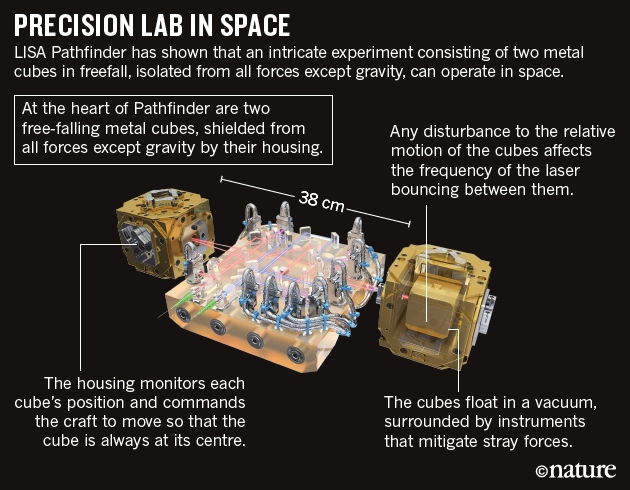