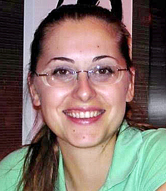 Maja Rogić Vidaković was born on 23 December 1982. She received her BA in speech and language pathology in 2005 by Faculty of Special Education and Rehabilitation, Department of Speech and Language Pathology, University of Zagreb, Croatia. She received her MSc in 2008 in neuroscience from Graduate School of Neural &amp; Behavioural Sciences, International Max Planck Research School, Eberhard Karly University, Tübingen, Germany. In 2012 she received her PhD in neuroscience from School of Medicine, University of Split under the mentorship of Professor Vedran Deletis. She is a senior research assistant and research associate at the Department of Neuroscience, School of Medicine, University of Split, Croatia. From 2013 she is the Head of the Laboratory for Human and Experimental Neurophysiology (LAHEN) at the Department of Neuroscience. Her research interests are preoperative mappings of higher cognitive functions (particularly speech and language) with special expertise in nTMS, with future desire to apply the reserch achievements for intraoperative mappings of patients in Croatia. To date dr. Rogić Vidaković published totaly 26 works: 13 scientific publications (9 in Current Contents), 13 conference papers, she has been invited speaker to 4 international conferences. The number of citations was more than 60 in 2015 and ΣIF 30.669 (2014 year). She is a member of Croatian Neuroscience Society, Croatian Society for EEG and Clinical Neurophysiology, Croatian Logopedic Association. She received Rector&#39;s award from the University of Zagreb, and 1 st award for best scientific poster for 2015 and 2012 at the International symposium on Navigated Brain Stimulation in Neurosurgery in Berlin, Germany.

All session by Maja Rogić Vidaković